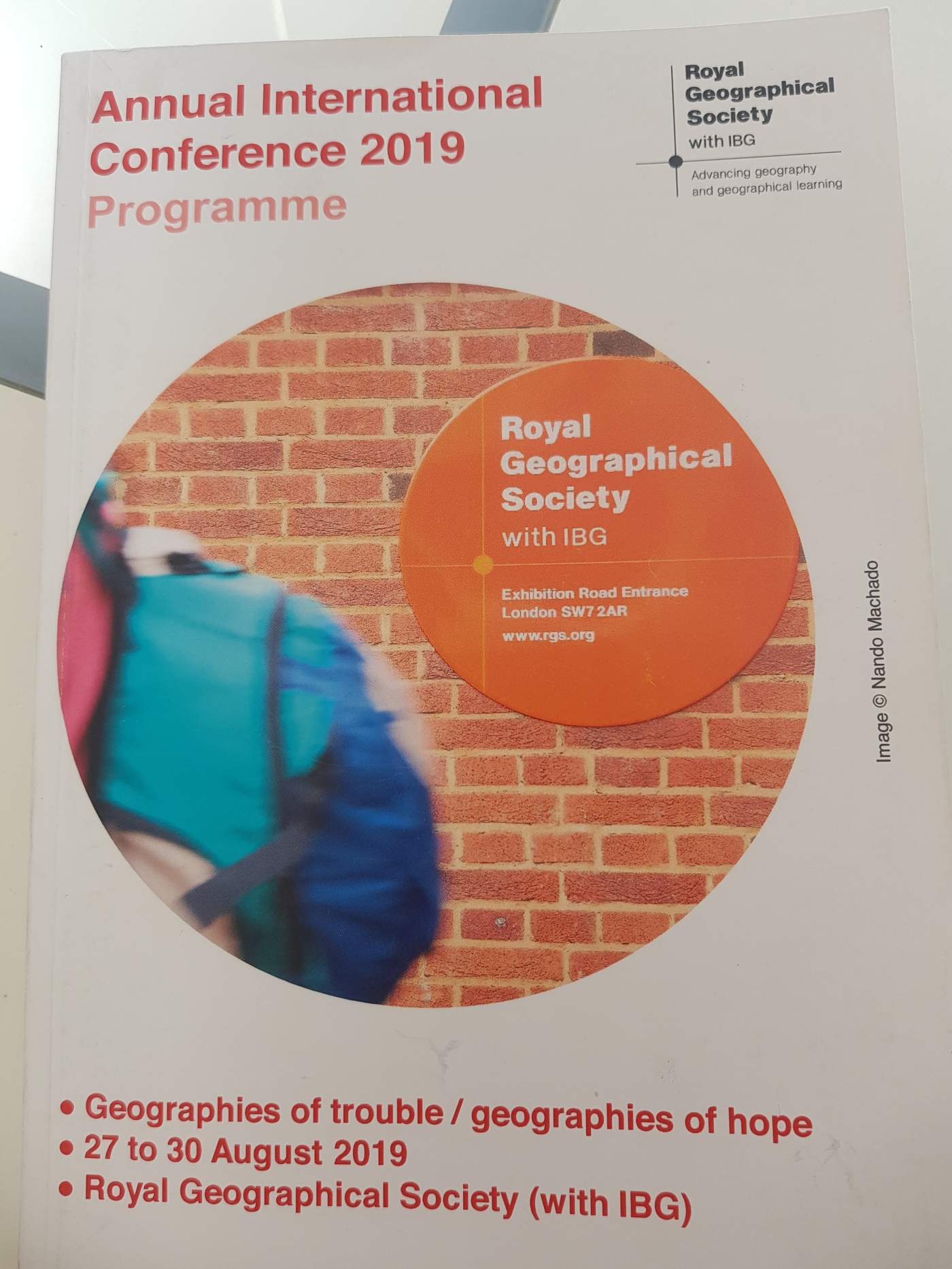 This year the conference proved to be very busy, chairing three sessions and also the Geographies of Leisure and Tourism Research Group AGM.

Thursday I co-chaired and presented in the Geographies of Inequality and Hope: Towards Sustainable Tourism Futures, I which I presented a paper with Dr Brendan Paddison. My copy for this paper is below.

This was followed by chairing the Tourism Geographies session and the GLTRG AGM along with attending the GLTRG social event at the Bunch of Grapes.

Friday I co-chaired a session with Dr Maggie Miller

In my paper I aimed to provide an analysis of the gendered nature of governance structures in UK mountaineering and the impact this has on female mountain leaders as stakeholders. I did so by applying the theories of Jacques Derrida to consider inequality in mountaineering destinations.

Following the 9/11 terrorist attack, Derrida used the biological analogy of the immune system to describe how communities exist and become autoimmunitary. The premise of his argument was that biologically the immune system acts to protect the body, creating immunity from foreign bodies and aliens; for which, in the same way, the rules governing mountaineering are highly effective by establishing exclusivity through the processes of achieving legitimacy. In this context, ‘the immune system is riddled with images … of invaders and defenders, hosts and parasites, natives and aliens and of borders and identities that must be maintained’ and governed. Coining the term the ‘terrorist cell’ he painted a terrifying picture of how communities produce autoimmune reactions and turn in on themselves when blanket rules are applied and difference is suppressed.

The structures that govern mountaineering tourism were founded upon the establishment of Victorian middle-class gentleman’s clubs in the mid-1850s. These clubs were and still are responsible for the codifying and classifying mountains providing the structure that governs how mountains are performed, produced and reproduced as destinations. Historically mountaineering has been founded on who makes the first ascent of a route or summit, of which few are women. All new routes are then described in official guidebooks produced by clubs. The codification of mountaineering, as a male-dominated activity, has changed little since the conjoining of adventure-ness to questions of modernity and manliness established during the Victorian period as a leisure and nation-building sport.

Further popularised by the pioneering exploits of adventurers like Hillary and Tensing Norgay who made the first ascent of Everest in 1953. Such highly publicised nation-building events acted as a catalyst for the growth of a booming adventure tourism industry. Fast forward to 22 May 2019 when more than 200 mountaineers ascended Mount Everest, of which only twelve were women.

So feminine spatial practices in mountaineering are constructed through codes fixed by class, gender and race established through masculinised body politics. Transgressing the rules of climbing mountains is socially contentious affecting what, how, and who can make a legitimate claim to be a mountaineer.

In 1944 the British Mountaineering Council (BMC) was formed in an attempt to address the exclusivity of the Club system. Yet this model was fundamentally flawed in its aim, as it was founded, upon the club network. As a non-governmental public body, the BMC chiefly manages access to and participation in mountaineering and thus collaborates with National Parks and Local Authorities to help manage mountain spaces and places. The model illustrates how mountaineering is fundamentally underpinned by the club system.

Female representation in both clubs and public organisations like the BMC have, is poor, with posts within the BMC being traditionally filled by members from the older established clubs. Since the admission of women to the Alpine Club in 1975, there has only been one female president and the BMC appointed its first female president in 2017. Illustrated by a systematic survey of the 32 climbing guidebooks I own, covering the major mountain areas in the UK, only one has received editorial contributions from a woman. Topographically and geographically femininity is virtually absent in the classification of mountain spaces and places as tourist destinations.

Women have attempted to address this imbalance through establishing female-only clubs, mountaineering expeditions and training programmes. However, by replicating the existing club system, my research has shown, that women have reinforced the interests of the dominant norm, through replicating exclusivity that reproduces marginalisation. In fact, early 20th-century female climbing clubs established a code of modest silence in an attempt to preserve space, which continues to be reinforced today illustrated by an article by Schirrmacher in the British Mountaineering Council’s magazine describing how promoting one’s achievements … ‘is just not what British Women do’ (Schirrmacher, 2008) rendering women virtually invisible.

Female mountaineers oscillate between the states of defender and alien within mountaineering communities, by under-promoting their achievements, they reinforce their difference and perceptions of being an outsider within.

In contrast, women have attempted to resist such silencing effects by producing alternative mountaineering spaces through the establishment of codes such as climbing manless. In 1959, Claude Kogan, pioneered the first all-female Himalayan expedition to make the first ascent (male or female) of the world’s sixth-highest peak, Cho Oyu. The expedition was politically charged because women not only wanted to prove they could undertake such projects unassisted but were also demanding public recognition for their achievements. Unwittingly, Kogan’s purist approach to manless mountaineering had established a new standard governing legitimacy of female-only high altitude ascents, which replicated the dominant model of governance. The production of such female codes have had serious consequences for female mountaineers who followed. Wanda Rutkiewicz and Alison Chadwick first ascent of Gasherbrum III, in 1975, was unfairly branded illegitimate because they had been followed to the summit by a male party. In contrast, such accusations did and do not affect male legitimacy if female peers are connected to a male first ascent. A clear illustration of an autoimmune reaction within the mountaineering community.

My research has revealed this legacy pervades where I found that professional female UK mountaineers had a propensity to reject what they saw to be the ‘women’s movement’ because they felt it could mark them out as troublemakers and reduce their space to be considered legitimate mountaineers, professionally, socially and economically. This self-masculinising and self-silencing continues to reduce women’s visibility and therefore has an impact on the number of women assuming leadership roles. Today only 37 women are professionally qualified to lead mountaineering routes in the UK and 6 Internationally. Mountain Training recognizes the need for rebalancing gender inequalities but have yet to produce a strategy.

So what are the solutions and does Derrida offers hope?

The solution Derrida offers is based on specificity, collaboration and learning systems as a way to resolve differences within a community. Although the autoimmunitary analogy used by Derrida has dark implications it also demonstrates how bodies such as communities are vital, ever-changing forces with the absolute potential for change. If, as Derrida suggests, we work to detect the processes of learning and apply them through practice, perhaps difference can be integrated and inequalities can be reduced. When difference becomes a point of learning the fundamental meaning of hero/heroine – the central tenet of mountaineering – can effectively be challenged and evolve.

Examples of learning and adaption were revealed through my research where the use of ‘softer skills’ or more feminised traits, such as giving feedback, unpacking taboo psychological and physiological issues like the menopause and collaborative decision-making are being adopted and in some instances formalised through training.

Formalising such tools like ‘softer skills’ through training programmes and engagement strategies could facilitate learning and the necessary adaption that diversifies mountaineering opening a doorway to difference.